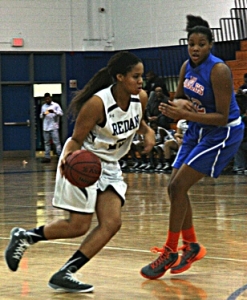 Redan two-sport athlete Jaylen Black (with ball) was her school’s valedictorian for 2015.

DeKalb County senior athletes showed their academic prowess in 2015 by carting away half of the top academic awards at the 19 high schools which participate in athletics.

The 19 high schools, including magnet programs, honored 48 valedictorians and salutatorians for their academic achievements in the 2014-15 academic school year and 25 of the honorees participated in athletics during their high school tenure.

Twelve of the honorees collected the highest academic honor for a high school student in being named their schools’ valedictorians, five of which participated in two sports. Athletes swept both honors at six high schools, including Cedar Grove, Cross Keys, Druid Hills, Dunwoody, Martin Luther King Jr. and Redan while taking three of the four honors at Southwest DeKalb which honors both magnet and resident students.

Martin Luther King Jr. valedictorian Ilka Ervin participated in volleyball and softball during her high school career while maintaining her high academic standings. Ervin has received a full academic scholarship to Howard University in Washington D.C. while also being accepted to six other institutions of higher learning.

Redan’s Jaylen Black was another two-sport star earning valedictorian honors while playing basketball and softball. She was part of Redan’s 2014 Class 4A girls’ basketball championship team that finished with an unblemished 33-0 record. Black is headed to the University of Georgia to continue her education.

Cross Keys valedictorian Raul Perez participated in swimming and cross country during his high school career. Studying Neuroscience, Linguistics and Psychology at Emory University is his next stop.

Stone Mountain has co-valedictorians this year in girls’ tennis players My-Hanh Nguyen and Ngoc Thong (who also put in some time with soccer). Both are headed to the University of Georgia with Nguyen starting on a Computer Engineering degree and Thong beginning the long trek to becoming a pediatrician working on a Science degree. 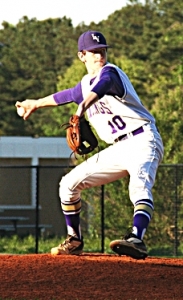 Lakeside baseball player Michael Boden was named 2015 valedictorian and is headed to Stanford in the fall.

Two of the athletic valedictorians are headed out of state to prestigious universities in Druid Hills Abishkar Chhetri and Lakeside’s Michael Boden. Chhetri has been accepted into the Massachusetts Institute of Technology (MIT) while Boden is headed to Stanford University in Palo Alto, California on a full academic scholarship to study Management Science and Engineering.

Dunwoody valedictorian Audrey Benson played a big role at No. 1 singles for the Lady Wildcat tennis team that advanced to the Class 5A Sweet 16 this spring. Benson, the current President of the Dunwoody Student Government Association, is beginning her path to medical school at Georgia Tech while studying for a Biology degree.

One of four multiple sport athletes named salutatorian was Dunwoody’s Catriona Geddes who was a DeKalb County All-Star selection in softball and part of the Lady Wildcat swim team that finished fourth in the state championships this spring. Geddes plans to attend the University of Georgia as a CURO and Woodruff Scholar while majoring in Chemistry on a pre-medical track. She also combines with fellow Dunwoody student/athlete Audrey Benson at the top of their senior class.

Redan’s Melanie Abron excelled in volleyball and soccer during her high school career and with her academic achievement of salutatorian and Jaylen Black receiving the valedictorian honor put two more athletes at the top of their senior academic classes. Abron is headed to the University of Georgia.

Miller Grove salutatorian Javane Stewart was an All-Region 6-5A selection in football and a DeKalb County All-Star soccer selection as a two-sport star for the Wolverines. Stewart is headed to Georgia Southern to continue his football career and education while studying Business Management.

McNair’s Nashaia Beasley rounds out the two-sport athletes named salutatorian. Beasley participated in softball and soccer for the Lady Mustangs and is heading to the University of Georgia after being recognized in April by the Atlanta Journal-Constitution as a first generation college student.

McCoy plans a double major in Spanish and Psychology at Georgia where Troung also plans to attend and study Engineering. Jackson is headed to Georgia Southern and Robison moves on to Georgia Tech.

Southwest DeKalb salutatorians Jada Hislop (Magnet) and Nikea Conyers (Resident) make three out the four top honors awarded to athletes in the Panther athletic program. Hislop has participated in lacrosse and Conyers tennis. Hislop was also named Star Student and is headed to the University of Southern California to work on her pre-med degree on the path to being a surgeon. Conyers is headed to Oglethorpe to study journalism.

Chamblee Magnet School salutatorian Swapnil Agrawal (tennis) is another DeKalb student-athlete on the way to the University of Georgia. Agrawal is a UGA Foundation Fellow.

Towers’ salutatorian Hernan Gallegos (swimming) is headed to Tufts College in Massachusetts with an institutional scholarship in hand.

Tucker salutatorian and Star Student Collin Kelly (swimming) is set to continue his education at Emory University and major in Business and Finance.

Twenty of the student athletes have elected to stay in the state of Georgia with UGA (9) being the top choice. Georgia Tech follows with four while Emory, Oglethorpe and Georgia Southern have two each and one is headed to Armstrong State.

Two are headed to California (Stanford, USC), two to Massachusetts (MIT, Tufts) and one to Washington D.C. (Howard).