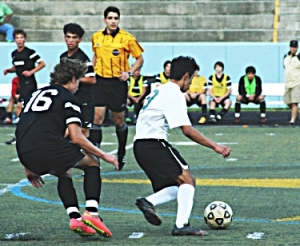 Cross Keys’ Gilberto Ramos (white jersey) had a pair of assists to lead the Indians to a 2-0 win over Southeast Whitfield and into the Class 4A Championship game. (Photo by Mark Brock)

History was made in Whitfield County on Tuesday night as the Cross Keys Indians defeated Southeast Whitfield 2-0 to advance to the Class 4A soccer state title game for the first time in program history.

The Indians (15-3-1) dominated the second half of the game after Southeast Whitfield controlled the first half, but could not score as the teams went to the half in a scoreless tie.

Cross Keys came out determined to control the game in the second and it took only 90 seconds to make a statement.

Gilberto Ramos got the first of two assists on the night as he led teammate Victor Owiredu with a nice pass allowing him to score the first goal of the game for the 1-0 lead with 38:30 left on the clock.

The Indians controlled the ball for long stretches of the second half while continuing their strong defense to protect the lead they took early in the half.

As the clock ticked down to the three minute mark, the Indians got their chance to put the game away as Ramos connected with another pass for an assist. Roberto Martinez was the recipient of the second Ramos assist giving the Indians the 2-0 advantage and some breathing room as the game was coming to a close.

Cross Keys to play keep away and with Alexis Briceno in goal for his second shutout of the playoffs closed out the game for their first state title game berth in school history.

The Indians will take on fellow DeKalb County school St. Pius X in an All-Region 6-4A boys’ championship final. St. Pius, the No. 1 ranked Class 4A team and undefeated at 21-0, defeated Cross Keys 2-0 back on February 10 in a game which was 1-0 late in the game.

The 15-3-1 record this season ties the second most wins in a season for Cross Keys which was set in 2003 by Bill Bratton’s squad at 15-4-1 and trails the 16-3-0 record set by Bryan Wallace’s 2008 squad. Both those teams lost in the second round of the state playoffs and the only team to advance to the semifinals was the 2011 team which finished 14-6-1.

Cross Keys becomes the first DeKalb Schools soccer team to reach the championship game of its classification since the 2008 season when both Chamblee (3A) and Lakeside (4A) claimed state championships. Chamblee won 2-1 over Westminster, the No. 1 ranked and No.  1 seed from Chamblee’s Region 6 that season.

A victory against St. Pius would give Cross Keys the school’s third state title. Cross Keys won state titles in 1961 (wrestling) and in 2002 (boys’ basketball).