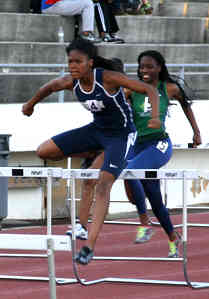 Redan’s Shequilla McClain accounted for 18 of her team’s points to lead Redan to a third place finish in the Class 4A Girls’ State Track and Field Championships. (Photo by Mark Brock)

The Redan Lady Raiders led by a first place finish in the Class 4A 4×400 meter relay and 18 points by junior Shequilla McClain picked up the highest finish of the state track meet at third in the Class 4A Championships with 56.50 points.

The 4×400 relay team of Promise Clark, Miyah Golden, Zindzy Jones and McClain ran a 3:51.37, 2.12 seconds faster than their qualifying time, to capture the gold in the final event of the day and solidify their third place finish at the state meet.

Senior Promise Clark accounted for 14 of Redan’s points topped off with eight points from a silver medal performance in the 400 meter dash (55.29).

DeKalb County champion Chamblee also finished in the Class 4A Top 10 with 38 points to tie Eagle’s Landing for eighth overall out of 36 teams to score points.

The Chamblee 4×400 relay team Ashanti Brown, Elena Brown-Soler, Venida Fagan and Monique Keene also picked up a bronze medal with a time of 3:55.44 to wind up the day in Albany.

Class 5A
Stephenson junior Timberly Molden put on an excellent performance bringing home a pair of gold medals to help Stephenson to an eighth place finish out of 50 teams with 25.50 points.

Defending state champion Miller Grove dropped to a tie for 11th overall this year after losing several big performers from their 2014 state title team.  Senior Alexia King picked up a silver medal in the 300 meter hurdles (43.94) and was fifth in the 400 meter dash (56.63) to account for 12 of the Lady Wolverines 19 points on the day. Senior Dazjsha Brown was fourth in the 300 hurdles (45.02) to add five points to the Miller Grove total.

Dunwoody rode the gold medal winning performance by junior Ansley Heavern, who won the 3200 meter run (11:38.72) to account for all 10 of the Lady Wildcats points, which put them in a tie for 20th with Ware County.

Junior Ashley Middlebrooks finished fourth in the 800 meter run (2:19.08) to give Southwest DeKalb five points and a tie for 29th overall.

Class 3A
Junior Amani Taylor paced the Cedar Grove Lady Saints to a tie for 12th in the Class 3A State Track and Field Championships at Albany.

Taylor put together a gold medal winning performance in the discus with a toss of 116-09.00 and a fifth place finish in the shot put (35-04.00) to account for 14 of the team’s 15 points in the championships.

Class 6A
The Tucker Lady Tigers picked up five points on the day to finish in a tie for 32nd at the Class 6A State Track and Field Championships at Albany.

Junior Kiera Washington accounted for the five points with her fourth place finish in the 800 meter run (2:14.84).