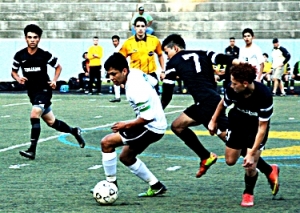 Cross Keys junior Joseph Avellaneda (white jersey) had two goals to lead the Indians past Johnson-Gainesville 3-2 and into the Class 4A state semifinals. (Photo by Mark Brock)

The scrappy No. 8 ranked Cross Keys Indians took advantage of free kick opportunities and good defense to knock off No. 4 Johnson of Gainesville 3-2 on Saturday at Johnson to advance to the Class 4A Boys’ State Playoffs semifinals.

The Johnson Knights (17-3-0) were the aggressor early on and took the lead 1-0 with 14:33 to play in the first half as David Flores got the rebound off a blocked shot in front of the Cross Keys goal for the advantage.

The Indians (14-3-1) then began to control the ball with good defense and looked for their opening. The opening came with just over eight minutes left in the first half as the Cross Keys pressure got a call on Johnson to set up a free kick for junior Gilberto Ramos from about 25 yards out.

Lopez put the ball up allowing junior Joseph Avellaneda to head the ball into the goal from just out in front to tie the game at 1-1 with 8:03 to play in the first half.

The teams would go to the half tied and continued to be tied for the first 18 minutes of the second half. Johnson appeared to take the lead on a goal by Fernando Carillo, but an offsides call disallowed the goal.

The Indians wasted little time as another free kick, this time by Alberto Peralta, set up Avellaneda for his second goal. Avellaneda got the free kick and as the Johnson defense pulled out to defend he put the ball into the net with 20:33 to play for a 2-1 Cross Keys lead.

Senior Felipe Lopez took advantage of the Johnson aggressiveness due to being down a goal streaking down the sideline and drawing a free kick from near the corner. Lopez lofted a shot across the goal where junior Victor Owiredu got into the air and headed the ball into the net for 3-1 lead with just 7:45 left on the game clock.

Jaime Rosales gave Johnson a big lift with 3:35 to play as he capitalized on a free kick to put the ball in the goal to close the gap to 3-2.

Fabian Abarca followed up with what appeared to be the tying goal just a minute later, but he was flagged for offsides and Cross Keys held on the rest of the way to move into the semifinal for the second time in school history. The last time the Indians made the state semifinals was in 2011 when they finished 14-6-1 with a loss to eventual state champion Westminster.

Class 6A Playoffs
The No. 10 ranked Tucker Tigers came up short in their bid for the semifinals with a tough 1-0 road loss to Alpharetta (12-5-1) on Saturday.

The Tigers finish the season 15-3-0 in their first foray into the Class 6A state playoffs.

Class 5A Playoffs
The No. 8 ranked Clarkston Angoras run in the Class 5A state playoffs came to an end in a heartbreaking 2-1 loss to No. 5 ranked Riverwood at Hallford Stadium on Saturday.

The Angoras finish the year 16-2-1 overall after winning the Region 6-5A title.