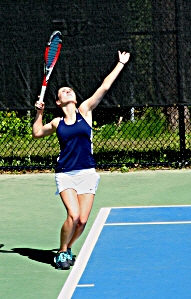 Dunwoody’s Paige Borcherding served up a 6-0, 6-0 win to propel Dunwoody to a 3-0 victory over East Paulding in the Class 5A state playoffs. (Photo by Mark Brock)

The first round of the GHSA Tennis State Playoffs got underway on Monday with 6 of the 14 DeKalb County teams entered into the competition getting in matches on the first two days.

The Dunwoody Lady Wildcats and Lakeside Vikings were the only teams to pick up victories on Tuesday.

Dunwoody improved to 14-3-1 on the season as the Lady Wildcats dispatched the East Paulding Lady Raiders (12-4) in less than an hour in a 3-0 victory at Dunwoody.

Sophomore Paige Borcherding improved to 10-5 overall and 8-0 at No. 2 singles with a very quick 6-0,6-0 win over East Paulding’s Brooklyn Owensby to get the Lady Wildcats off to a fast start.

The No. 2 doubles team of sophomore Jaydra Von Behren and senior Jordon Kenter also made a clean 6-0, 6-0 sweep over East Paulding’s Kallie Capes and Jordyn Barron to pull Dunwoody within one win of advancing to the Sweet 16. The Dunwoody pair were teamed up for just the third time this season and improved to 2-1 overall at No. 2 doubles.

Senior Audrey Benson closed out the victory in similar fashion taking a 6-1, 6-1 victory over East Paulding’s MacKenzie Kuhn. Benson, 6-4 at No. 1 singles, broke Kuhn’s serve in the final game to finish off the win.

Dunwoody moves on to face the Gainesville/Riverwood winner in the second round at Dunwoody.

In other Class 5A action, Southwest DeKalb fell 5-0 to South Paulding in boys’ first round play to end the Panthers’ season.

The Lakeside Vikings made short work of Valdosta with a 5-0 victory in the opening round of the boys’ Class 6A state playoffs. The Vikings improved to 13-3 on the season and move into the second round against North Cobb, a 3-0 winner over Newnan in first round action.

Lakeside hosts North Cobb at 3:00 pm on Thursday at the DeKalb Tennis Center.

In other Class 6A play, the seasons of the Tucker Lady Tigers and Lakeside Lady Vikings came to an end in first round play. Tucker dropped a 4-0 decision to Tift County on the road while Lakeside fell 4-1 at home to Lowndes.

The Chamblee Bulldogs wrapped up their season on Tuesday as Woodward took a 5-0 win to eliminate the Bulldogs.

Dunwoody is 17-0 heading into its match against East Paulding today at Dunwoody with first serve set for 4:00 pm today (Wednesday). The Wildcats are led by junior Brandon Gita who is 13-0 overall (8-0 at No. 3 singles), senior Luke Bynum 11-2 overall, 6-2 at No. 2 singles) and junior Andrea Ubezio 6-2 overall and in No. 1 singles. This is the Wildcats 10th consecutive playoff appearance.

The Region 6-4A champion Chamblee Lady Bulldogs (12-4) open the Class 4A state playoffs by hosting Troup County at 4:30 pm at HIT Atlanta today (Wednesday). Chamblee is led by senior Gabby Robinson, 16-0 at No. 1 singles, and freshman Olena Bilukha, 16-0, at No. 2 singles.

Southwest DeKalb (8-2) is in the girls’ state playoffs for the first time since 2005 and fifth overall appearance as it hosts Villa Rica at Dottie Bridges at 4:30 pm today (Wednesday). The Lady Panthers are looking for their first playoff victory.

The Druid Hills Red Devils are also hosting today at 2:00 pm as they take on Alexander at the DeKalb Tennis Center. It is the Red Devils’ third consecutive playoff appearance and they are 1-5 overall in the playoffs.

The Clarkston Angoras, Martin Luther King Jr. Lady Lions and Towers Titans are making their first ever appearances in state tournament play today. The Angoras travel to Allatoona for their Class 5A tournament debut while the Lady Lions also go to Allatoona to get their first taste of playoff action at 3:00 pm. Towers is playing Westside of Augusta in the Class 3A first round at Augusta’s Newnan Tennis Center at 1:30 pm.