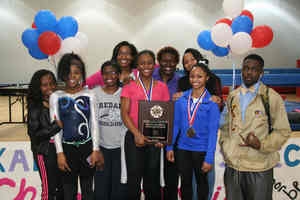 The 50th edition of the DeKalb County Gymnastics Championships was the closest team scores since the 1991 Championships and featured a Redan sweep of the team and All-Around titles at Dunwoody on Tuesday.

Freshmen Zaaynah Saadiq and Miya Hemingway combined for 62.55 points of the Redan Lady Raiders 86.5 points to lead Redan past Dunwoody by just .65 points as the top four teams finished within 4.85 points of each other at the end of the competition.

Three-time defending champion Lakeside (84.85) came up just 1.85 points back to finish third while Arabia Mountain (81.65) came in fourth with only a 4.85 points deficit. 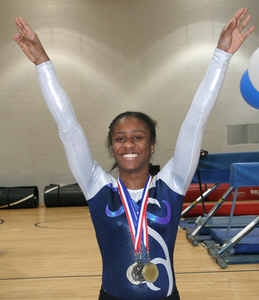 Saadiq placed in all four individual events, including a win on the uneven parallel bars with a score of 8.35 and a second on the balance beam (7.85), to score 32.20 total points to edge out Dunwoody freshman Anna Boss (31.00) by just 1.20 points for the All-Around gold medal.

Boss won the balance beam competition with a score of 8.20 and second in the uneven parallel bars (6.90) and fourth on the floor exercise (7.95) as she took second in the All-Around.

Hemingway won the Floor exercise (8.55), was runner-up in the vault (8.35) and third on the bars (6.80) to take third in the All-Around as all top three finishers were freshman.

Arabia Mountain junior Nia Freeman won the vault (8.50) and finished fifth in the All-Around to help the Lady Rams to their fourth place finish and improve on her sixth place finish of a year ago.

Chamblee sophomore Maulana Young was fourth in the All-Around with 30.05 points with a best finish of second in the floor (8.10).

Tucker sophomore Kiara Timmons helped the underclassmen dominate the All-Around finishing in sixth with 29.50 points with third place finishes in the vault (8.30) and floor exercise (8.00).