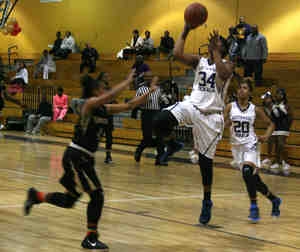 The No. 7 ranked Southwest DeKalb Lady Panthers used a big 16-3 run in the final 4:48 of the game to put away South Paulding 54-37 to advance to the second round of the state playoffs for the fourth consecutive season.

The Spartans (19-10) trailed 36-27 after three quarters in a very physical girls’ basketball game. A three-point play by Kelsi Fizer pulled the Spartans to within 38-34 with 4:48 to play.

Diamond Porter answered by drilling a three-pointer from the right side that would ignite a 12-0 run for Southwest. Freshman Michaela Bennefield would score the next five points with a layup and three of four from the free throw to push the lead out to 48-34.

Casey Kelly would go six for six at the line and add a layup on a nice pass along the baseline by Porter to close out the Panthers’ scoring.

Bennefield would finish the game with 12 points and 15 rebounds to lead Southwest DeKalb and teammate Jada Walton would add 10 more.

Lithia Springs, the No. 2 seed from Region 5-5A, quickly found itself trailing 41-23 at the half and never recovered against the Lady Jaguars.

Miller Grove 56, Hiram 53
The Miller Grove Lady Wolverines pulled off one of the first big upsets of the tournament by going on the road to knock Region 5-5A No. 1 seed Hiram 56-53.

Miller Grove trailed by eight points (49-41) entering the fourth quarter before turning up the offense and defense to outscore Hiram 15-4 in the final period fueled by 13 points from Imani Richardson who finished with a game-high 20.

Miller Grove improved to 15-11 on the season and Hiram’s season ends at 24-4. The Lady Wolverines Sweet 16 opponent will be Dutchtown (17-13), a 63-57 overtime winner over Effingham County. Dutchtown will be the host on Friday with a time to be announced.

Arabia Mountain finishes its most successful season with a 17-12 record.