The Marist War Eagles won their third DeKalb County Wrestling Championships title in six years by rallying from a first day deficit with a big showing on the second day of action at Dunwoody High School in the 54th edition of the championships.

Lakeside was the leader after the first day with McNair and Marist lurking as the wrestlers hit the mat on Saturday. Marist’s performance on Saturday for the win included winning four weight classes, two second places and two third place finishers. 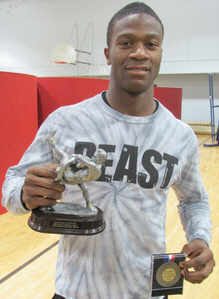 Southwest DeKalb’s Abdur-Rahman Yasin has won 87 consecutive matches and was named the William S. Venable Most Outstanding Wrestler for the 2015 Championships.

The War Eagles finished with 220 points after sweeping all three of the largest weight classes while McNair which had 10 wrestlers place in the meet took second with 187.50 and Lakeside had eight wrestlers to finish and compiled 164.5 points. 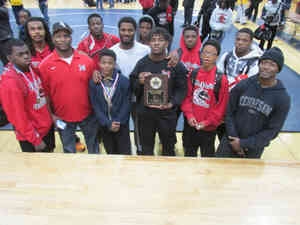 McNair’s lone gold medal came in the 152 weight class as Jamaal Deng, who finished in second in the 160 division a year ago, defeated Lithonia’s Te’Andre Newell in the championship match. McNair had runners-up in Terrance Perdue (138) and Justin Corley (182).

Lakeside’s wins were Josh Powell (145) and Spencer Wilson (126). Powell finished the meet by pinning each of his four opponents in the first round of each of his matches including Towers’ Marquez Horton in the championship match. Wilson took a win over Marist’s Alex Magee to win at 126 to claim his second consecutive gold in the championships. Lakeside’s Devon White (195) and Imani Heslop (220) brought home silver medals.

Southwest DeKalb which won the championship in 2011 and was a runner-up in 2013 came in fourth overall in the team standings with 138.00 points led by two-time state champion Abdur-Rahman Yasin.

Yasin got a battle from St. Pius’ Jack Marsh in a 14-7 decision, but pushed his season record to 32-0 and upped his win streak to 87-0 since 2013. His only career loss was due to an injury in 2013 and his career record is 104-1. Yasin was also named the William S. Venable Most Outstanding Wrestler for the 2015 Championships.

The Panthers also got a win from Masud As-Siddiq in the 106 class and a pair of silver medals from Muadh As-Siddiq (132) and Treylyn Meadors (170). 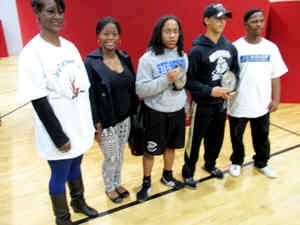 Last year’s champion Lithonia picked up three gold medals and a silver to finish fifth with 128.50 points. Kirkglen Hudson won his second consecutive county title moving up from his 106 class in 2014 to the 120 class this year. Hudson and Stephenson’s Said Banks had an epic clash in the championship match and were awarded the Jerun Tillery Best Finals Match Award in Hudson’s win.

Lithonia’s Chris Morgan defeated Muadh As-Siddiq in the 132 final while Allen Morgan took gold in the 138 final with a win over McNair’s Perdue. Te’Andrew Newell was the team’s silver medalist in the 152 class.

Dunwoody which hosted the championships finished sixth overall on the back of Chris Solo’s championship win over Malik Sterling of Stephenson in the 113 final.