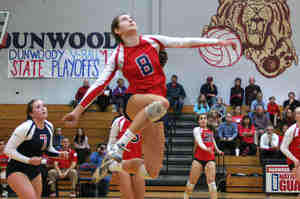 Dunwoody’s Paige McKnight (8) goes up for a kill against Creekview. (Photo by Mark Brock)

The award, which recognizes not only outstanding athletic excellence, but also high standards of academic achievement and exemplary character demonstrated on and off the field, distinguishes McKnight as Georgia’s best high school volleyball player.

“Paige is an extraordinary athlete and fierce competitor,” said Dunwoody community coach Steve Wilcosky. “Her love and passion for the sport of volleyball shows every time she steps on the court.”

The 5-foot-9 senior setter and right-side hitter slammed 475 kills while recording a .485 kill percentage and .344 hitting percentage this past season, leading the Wildcats (43-5) to the Class AAAAA state semifinals for the second consecutive year. The Class AAAAA Player of the Year as named by the Georgia Volleyball Coaches Association, McKnight amassed 301 assists, 250 digs, 245 service receptions, 101 service aces and 27.5 blocks.

She also led A5 Volleyball Club to a second-place finish in the 17 Open Division at the 2014 USA Volleyball Girls’ Junior National Championships this past summer while capturing Second Team All-American honors from PrepVolleyball.com.

“Paige’s ability to elevate the level of her teammates is second to none and really speaks to her leadership ability,” Wilcosky said. “However, it is her incredible work ethic that makes Paige the kind of athlete she is.  We are so happy for all her success and know this is only the beginning to a great career in volleyball.”

McKnight has maintained a 4.02 weighted GPA in the classroom. In addition to donating her time as a youth volleyball instructor, she has volunteered extensively on behalf of her church’s youth group.

McKnight has signed a National Letter of Intent to play volleyball on scholarship at Georgetown University in the fall of 2015 where she follows in the footsteps of her mother, Julie McKnight, who was a standout for the Georgetown team.

The Gatorade Player of the Year program annually recognizes one winner in the District of Columbia and each of the 50 states that sanction high school football, girls volleyball, boys and girls cross country, boys and girls basketball, boys and girls soccer, baseball, softball, and boys and girls track & field, and awards one National Player of the Year in each sport.  The selection process is administered by the Gatorade high school sports leadership team in partnership with USA TODAY High School Sports, which work with top sport-specific experts and a media advisory board of accomplished, veteran prep sports journalists to determine the state winners in each sport.