Surprise Mother-Son Reunion Was Almost 40 years in the Making 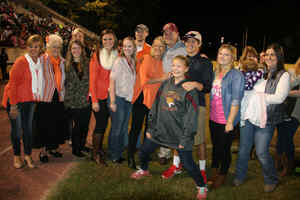 Friends and family made the trip to Adams Stadium to surprise Robby Gilbert. (Photo by Mark Brock)

Forty years ago Tucker Tiger assistant football coach Robby Gilbert was born and spent a short time in the arms of his 18 year old mother before she reluctantly gave him up for adoption.

Friday night at halftime of his team’s 55-0 victory over Alcovy, Gilbert walked out of the locker room with fellow assistant coach Todrick Malone talking about second half preparations and heard his son shout at him from behind the Tucker cheerleaders.

As he saw the cheerleaders part and his birth mother, Tish Myatt, standing there, a big smile came across his face. Then they were in each other’s arms for the first time since the night he was born. There were tears, smiles and hugs all around as he also met his newfound brother and sister. 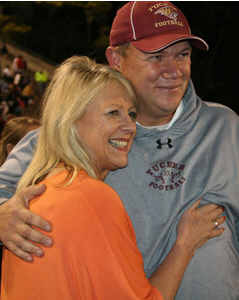 Gilbert knew he was adopted and had talked with his mother about trying to find his birth mother, but met some resistance and moved forward without starting a search.

“It was something I had thought about for a long time but Mom did not really want me to look for my birth mother,” said Gilbert. “I just did not know how it would turn out and Mom was not thrilled about me trying.”

Unfortunately, his mother passed away just over a year ago and Gilbert once again began thinking about his birth mother once again.

“I finally decided to go to the adoption service and filed the paperwork,” said Gilbert. “They said it would take three to six months before they would have anything for me.”

It did not take nearly as long and he got a call from the service informing him they had found his mother, but they had to wait until they got her paperwork before they would set up a three-way call between them along with someone from the service.

“I figured it would be weeks before I heard from them again, but I got a call the next morning (Friday) from the agency,” Gilbert said. “We got to talk the following Monday evening and we started talking and texting almost every day for the past three weeks.”

Tish Myatt graduated from Jonesboro High School and after giving Gilbert up for adoption made her way through life and landed in Taylor Mill, Kentucky not far from Cincinnati, Ohio. This, by coincidence, happened to be the same area where Gilbert’s wife, Amy, grew up.

This same area where his in-laws lived and he visited with his wife and family a few times a year had him close to his birth mother many times without a clue.

“I had the same pediatrician growing up as Robby’s brother and sister,” Amy Gilbert laughed about how close the two families have been over the years without knowledge of one another.

“One of our favorite restaurants up there is also one of hers,” Gilbert said. “We could have been sitting across the room from each other any number of times over the years.”

During his talks with his mother, Gilbert learned about his brother, Andrew, and sister, Olivia, who both made the trip to Atlanta to meet their new brother. As they began to plan a meeting, they had to tell their families what was happening and how they found each other after so many years.

Amy began to form a plan with the help of Tish and Coach Malone to make Friday’s surprise happen a week earlier than Gilbert expected.

“I was talking and texting with Coach Malone and then having to delete the calls and texts so Robby would not happen to see anything before we were ready,” said Amy. 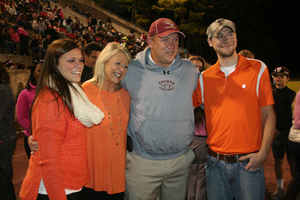 Gilbert began picking up on things such as extra trips to the grocery store as Amy began to get ready for this new part of the family to arrive. He even told several people before the game he had a feeling his mother was going to show up at the game, but he still wasn’t sure.

He turned to Malone as he saw his mother standing behind the cheerleaders and told him he had a feeling this was going to happen.

Tish Myatt kept wiping tears as Gilbert went to hug her other children, friends and family who all turned out for this grand reunion of a mother and her child.

“I’m just overwhelmed and so blessed,” said Myatt. “I really have no words. I’ve thought about him every day of my life.”

Now they get to spend time getting to know each other for the next part of their lives.