Manav Mathews, a senior at Chamblee Charter High School, has been named the 2017 STAR student for DeKalb County by the Professional Association of Georgia Educators (PAGE) Foundation and the DeKalb Chamber of Commerce. To obtain the Student Teacher Achievement Recognition (STAR) student designation, a student must have the highest SAT score taken during one sitting throughout his or her senior year. At the end of the student’s junior year, he or she must also be in the top 10 percent or be among the top 10 students numerically, whichever category provides the largest number of eligible students in the school. 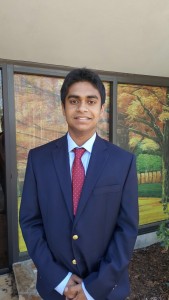 Mathews has been accepted by the University of Georgia as a Foundation Fellow. He also earned recognition for co-founding the Joy Committee at Chamblee Charter High to improve mental health at the school. Manav is a National Merit semifinalist, a national AP Scholar, and a recipient of the University of Georgia Certificate of Merit. An avid tennis player since age 7, Mathews has been a member of the Chamblee Charter varsity tennis team since the ninth grade, and currently serves as its captain.

“Manav is a leader and contributor to the mission and vision of our school in every way possible. He leads by the example with grace and humility. He is amongst the kindest and most service-oriented students I have ever encountered,” Sauce said. “He worked with classmates over the last two school years, during unspeakable tragedy at our school, to create a new student organization to provide joy, happiness, encouragement, and positive reinforcement to as many students as possible. He not only sets the bar high in the classroom, but he also demonstrates the highest and most admirable character traits.”

“Manav Mathews is an extraordinary young man who impresses most with his general knowledge, broad interest, and unusual maturity. Manav enjoys rigorous academic work and likes to be challenged in a wide variety of topics. He has a great sense of humor and a positive outlook on life,” Neuhaus said. “In German, Manav has reached near-native speaker proficiency. His participation in the Governor’s Honor Program, our school’s German exchange with the Albrecht-Dürer High School in Nuremberg, and his summer internship with a German company give evidence of his unwavering dedication to his education in general and German in particular.”